A Night to Remember

Encounter with Killer Whales in the Twillight 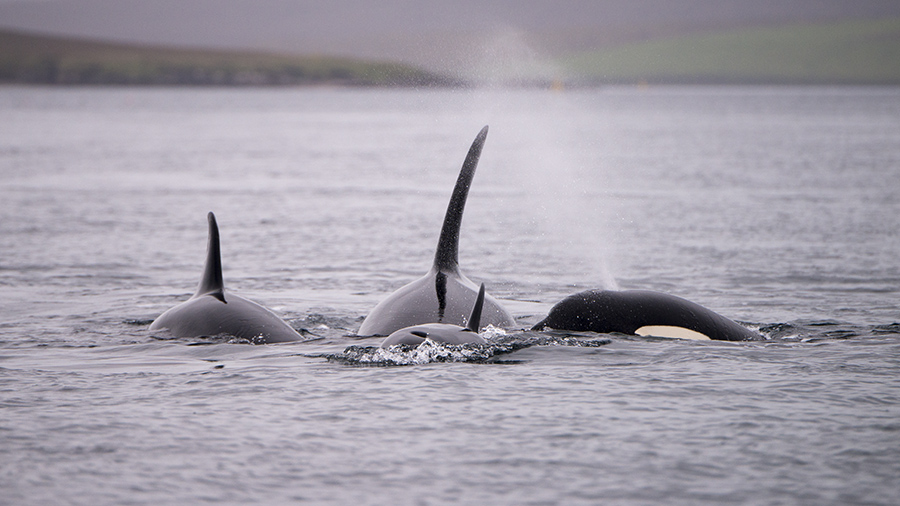 So there I was, running the Noss ferry like it was any other day when I saw my mates Melvin and Fiona blazing into view in their shiny new RIB.  Freshly arrived from the annual migration north from the Netherlands and barely settled in Nesting, they’d already been out scouting Yell Sound in search of our giant pied dolphins.  With little success up north, they set off to Noss for a wee visit, and who knew how this particular day would pan out! It ended as a night to remember.

Visitors were first on the case, with Shetlander Steve Hawick picking up a pod of approximately 5 orcas including a calf 100m below the spectacular viewpoint over to the Noup of Noss.  Spanish visitor Marta was also over at the time and managed some cracking shots of mother and calf from above. Both wardens were unable to share the experience, as the pod had moved south east by the time word got back to Andy, who made every effort to relocate them and return to Noss Sound in quick time to share the news.

The excitement waned with the realisation that the pod had passed us by, and we could only take satisfaction in the joy of a dozen or so visitors that had memorable views from the cliffs.  So it was back to the plan as we prepared to set out to monitor the Bonxie plot that evening.  That was until the rain set in!

Beast of a machine

At this stage Fiona was in for a cup of tea, and Melvin was returning from what he described as a very enjoyable dive at the Giant’s Leg on the south side of Bressay.   With the visitors off, Melvin offered to take me out for a wee ride in the new boat.  Now this was a step up from last year’s Zodiac, and a beast of a machine when it came to cutting through otherwise fearsome swell.  Conditions would have been unpleasant to say the least for the Noss ferry in this water, but a trip around the Noup on this particular evening in this vessel was as simple as cruise control.

The Noup, Kittiwakes, Bonxies going for Gannets, the ugliest chick in the colony and the search for the last of the jumplings, before Melvin decided he fancied a speculative look out to sea.  Melvin’s seen the big fish before, and was aware of how quickly they can move, and of their occasional tendency to linger in deeper water.  For me I was just keen to see Noss from a new angle! 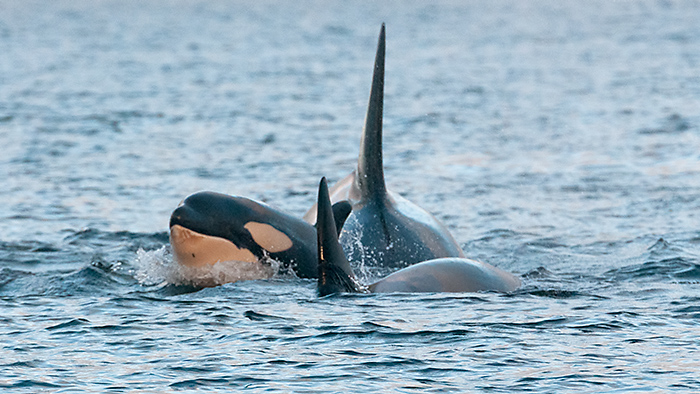 A rice cake each, and a quick check on Facebook-page Shetland Orca Sightings (4G is readily available in the inshore waters on the east side of Shetland with EE folks!) presented us with a decision: do we head to Fladdabister , or return to Noss and part company for the evening?  News of Killer Whales no more than a 30 minute run from our current location left us with little choice.

Beyond Bressay the RIB (call sign Orca) cut her way through ever strengthening swell from the North West until she neared the eastern coast of mainland Shetland, nearby where the pod had been reported not half an hour previously.  It was at this point that a couple of saving graces came into play: a comment on Facebook referred to their current location as nearby the orange RIB!  At this we began to feel extreme frustration.  Where were they?!  We scanned the sea in vain. 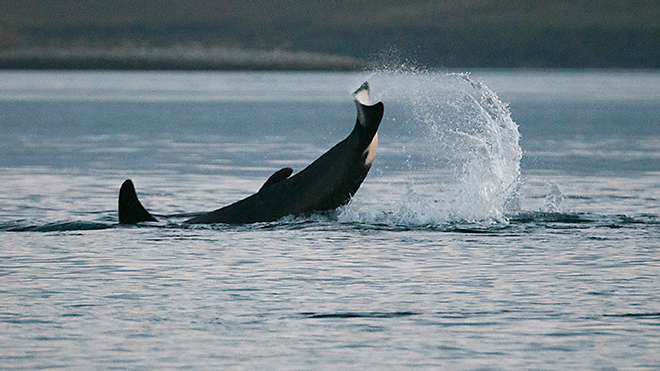 So with eyes peeled we proceeded south along the coast toward Mousa with hopes now high.  We turned the corner around Helliness and into the bay to the north of Mousa Sound.  A dark wall of rain loomed over the mainland, and there in front of us appeared a pod of Killer Whales!  Initially only brief views, they appeared to be swimming south, so we tried to keep our distance and maintain a steady pace, aware that if they chose to, they could be away from us in seconds and they were…

I was contacted by Hugh Harrop who was now onto them from the roadside near Sandwick, and he told us they were behind us.  We soon relocated them, and by giving them a wide berth and killing the engine and sonar to the north west, we were able to drift toward them at close range as they apparently fed, rolling on the surface into repeated shallow dives. 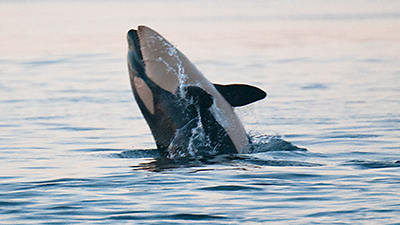 We turned off the engine and while drifting we observed at least five females, one of which has been identified as 019 (‘Mousa’), a large male and at least one calf, presumably one of last year’s.  As well as diving to catch fish, other forms of behaviour included logging both from the females and the male, a full breach from one female, partial breaching from the youngster and repeated spy-hopping close into the boat, possibly to investigate what the splashing was from the side of the boat.

As the light faded it became impossible for our already inadequate camera and two GoPros to record any more footage or photographs, and we were left for a further 10 minutes or so drifting in Mousa Sound with a pod of apex predators in awe of their size, strength and beauty, positively buzzing from the experience, cold in the choppy, windy and wet conditions and nevertheless reluctant to head back to Noss and call it a night. 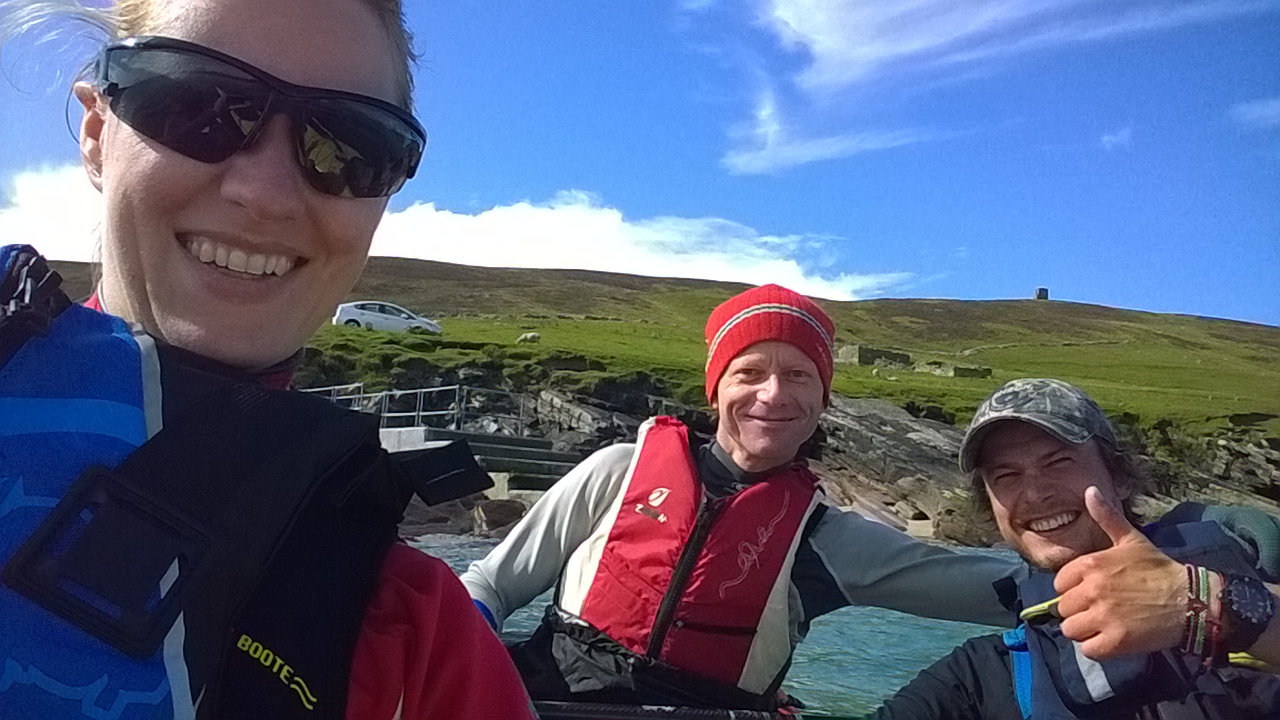